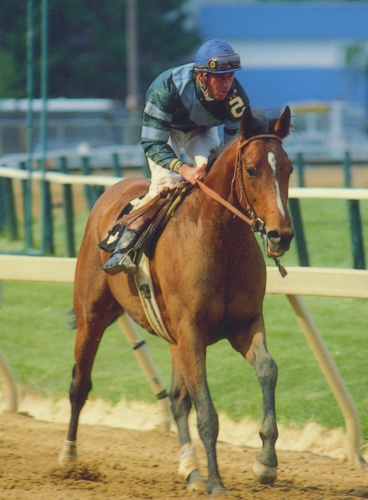 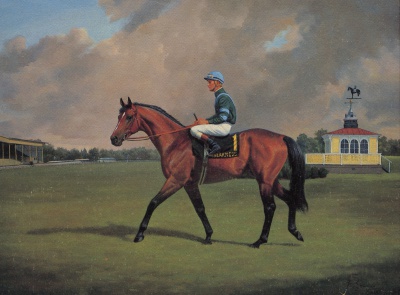 Classic winner Deputed Testamony became a hometown hero when he captured the 1983 Preakness Stakes (and he remains the most recent Maryland-bred to do so). The bay colt was Maryland through and through – bred by the Boni­face family of Harford County, who co-owned him with Boston, Mass., businessman Francis P. Sears in the name of their Bonita Farm, he was by a stallion who stood at Bonita, and trained at the farm by J. William “Billy” Boniface. He was ridden to victory in the Preakness by young Marylander Don­nie Miller, who picked up the mount when regular rider Herb McCauley elected to stay with stablemate Parfaitement.

Deputed Testamony’s rail saving trip and dramatic stretch run over the sloppy Pimlico surface caused mass celebration, including in the track’s press box, where the trainer’s father, the senior Bill Boniface, worked for decades as a racing editor for the Baltimore Sun.

In the final start of his 2-year-old season, the colt known as “D.T.” set a 1-mile track record at Meadowlands in the Play the Palace Stakes, his first stakes victory. In his prior start, Deputed Testamony just missed by a nose when second to Dixieland Band in the inaugural Maryland Juvenile Championship Stakes, with future Belmont Stakes winner Caveat finishing third, and was also second in the Smarten Stakes at Laurel in his stakes debut.

He came out at 3 and captured Pimlico’s Federico Tesio Stakes and the Keystone Stakes at Keystone before his run in the Preakness. During the summer he won Bowie’s Grade 3 Governor’s Cup Handicap before taking Monmouth’s Grade 1 Haskell Invitational Handicap. He concluded his year with a fourth-place finish in the Marlboro Cup Invitational Handicap-G1 behind Highland Blade, Slew o’ Gold and Bates Motel, the latter two Eclipse Award winners that year.

A member of one of the most accomplished Maryland-bred classes in history, Deputed Testamony earned the title of Maryland-bred champion 3-year-old over fellow classic winners Caveat and Shareef Dancer (Irish Derby).

Deputed Testamony was undefeated in two starts at 4, and once again was in the spotlight on Preakness Day when breaking the Pimlico track record for 1 1⁄16 miles (1:40.80) in the 1984 City of Baltimore Handicap on the classic undercard. He exited the race with a fractured coffin bone in his right fore, which forced his retirement.

The bay colt entered stud at Bonita Farm, which moved to a new, larger facility in Darlington, Md., and went on to become a solid sire. With 20 crops to race, he sired 83 percent starters from foals, and 76 percent winners from starters. His 21 stakes winners included graded winners Gold Fleece, Testafly and Under Oath. As a broodmare sire he was represented by the likes of Grade 1 winners Bellamy Road and Whitmore’s Conn.

Deputed Testamony was racing’s oldest classic winner when he died at age 32 on Sept. 18, 2012. He was buried on the farm next to his sire and dam.

As to the odd spelling of his name? Billy Boniface explained that he looked at the names of the colt’s sire and dam and asked his neighbor, John Clark, who was a lawyer and judge in Bel Air, Md., to give him a legal term that would put the two names together. “Deputed is a legal word, you can look it up in the dictionary,” said Boniface. “Testimony I just spelt wrong.”