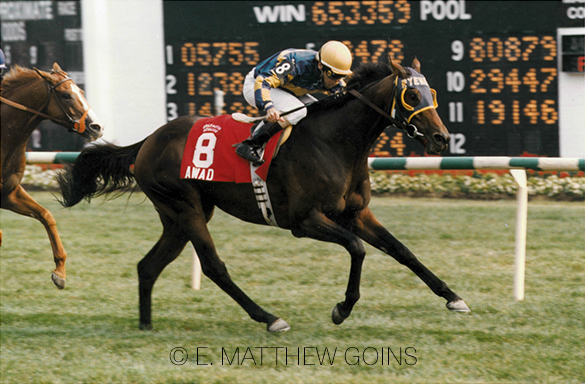 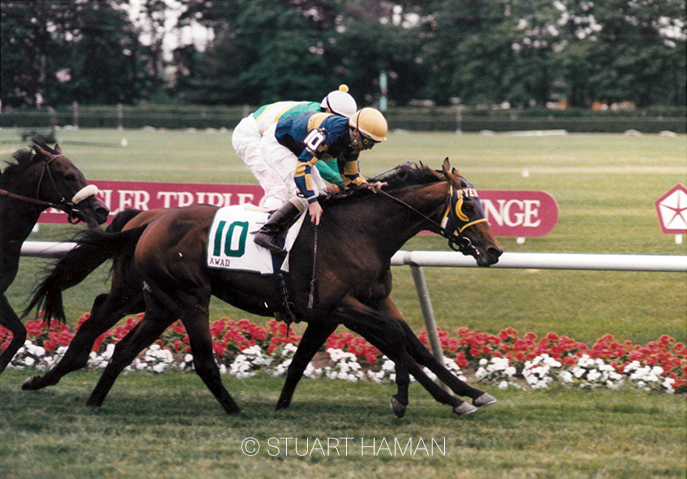 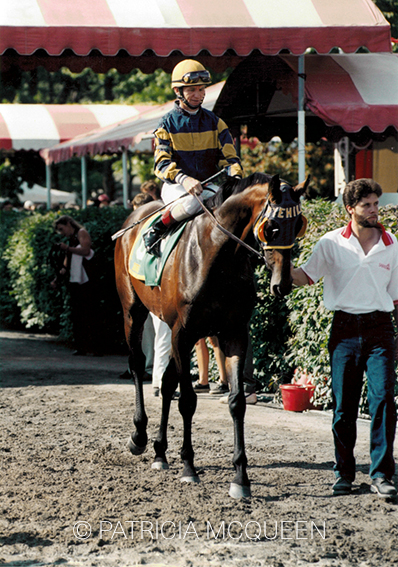 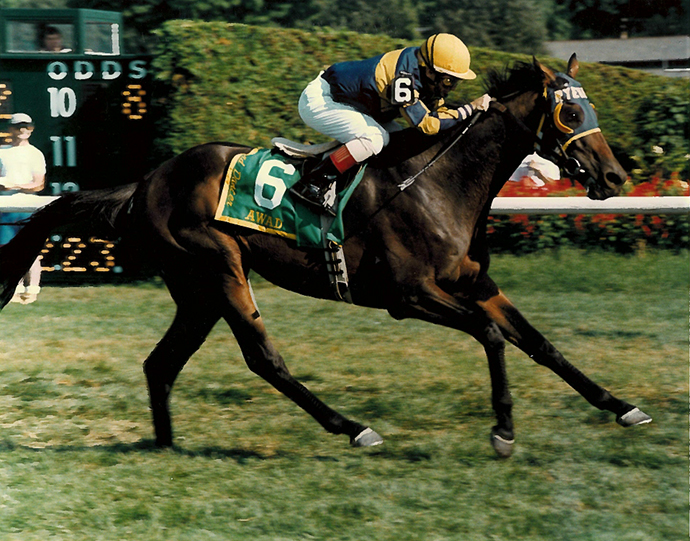 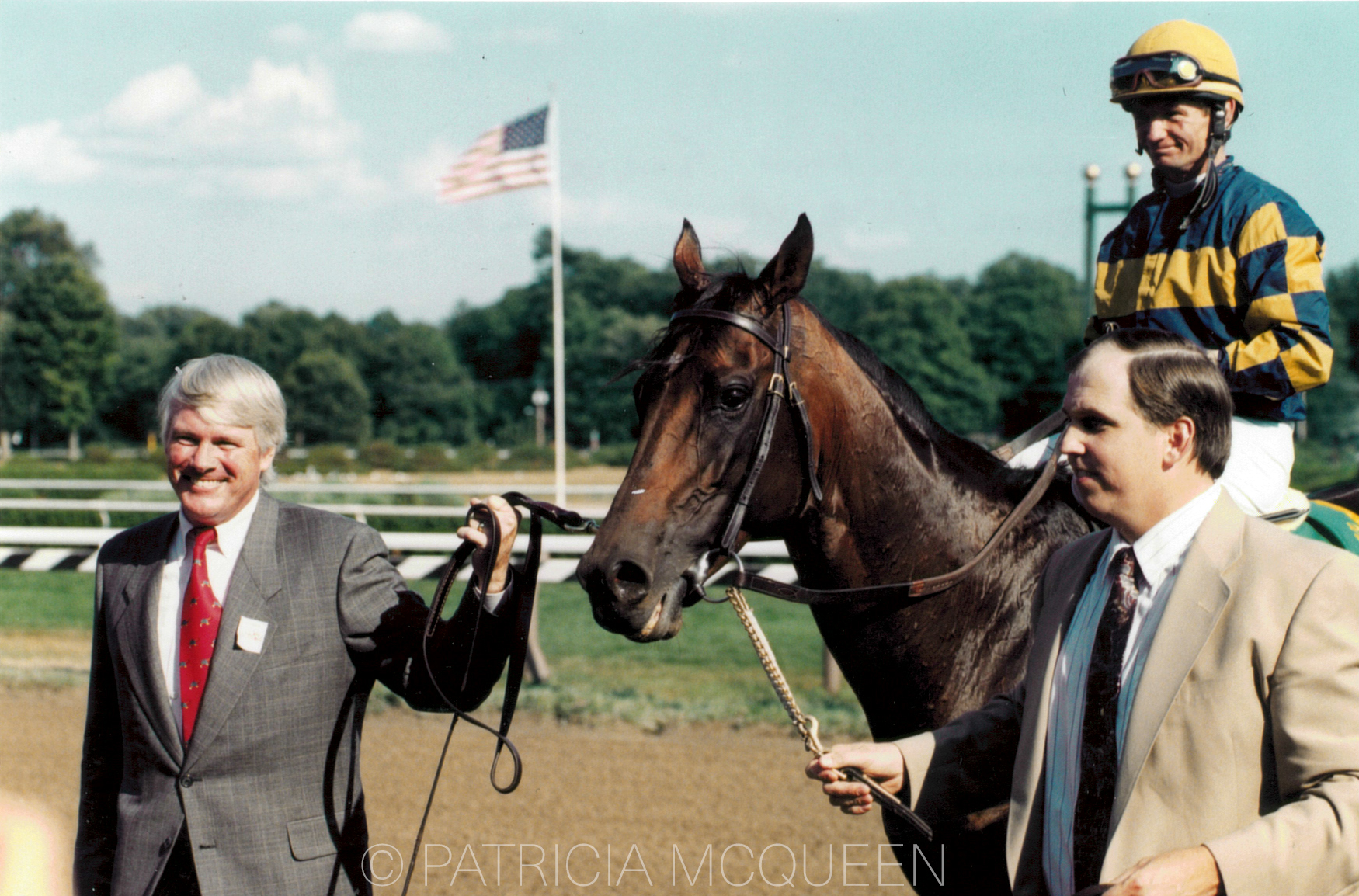 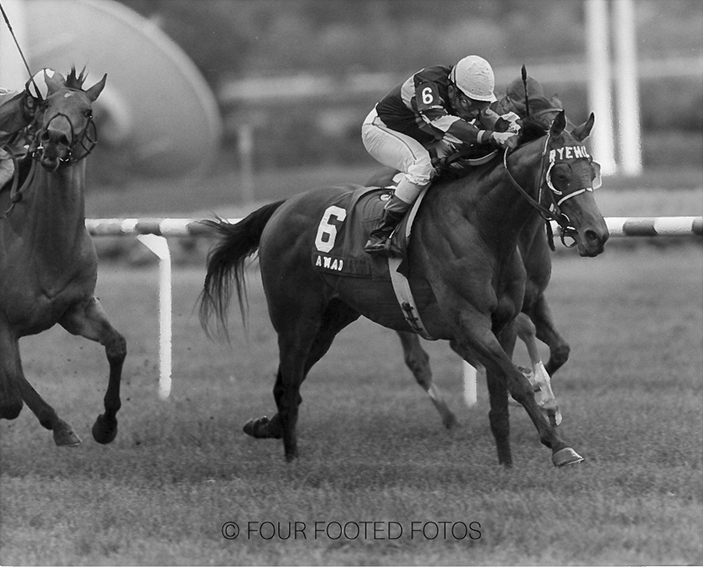 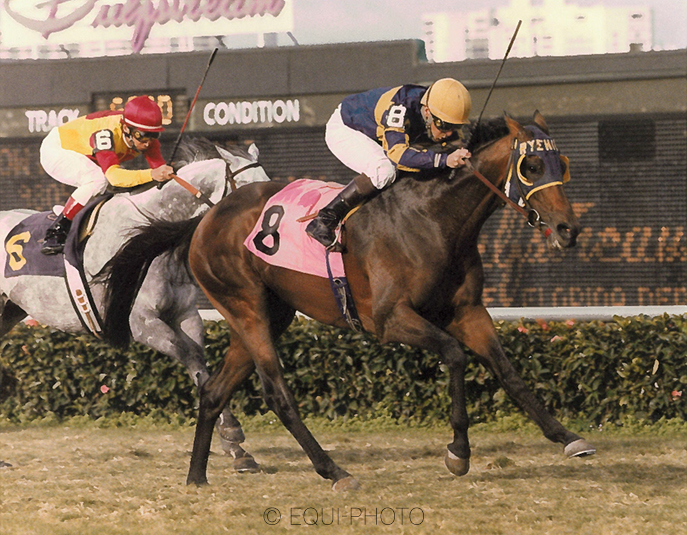 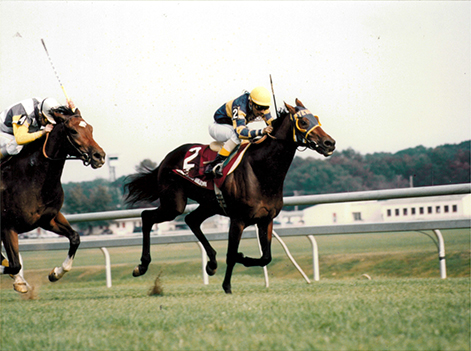 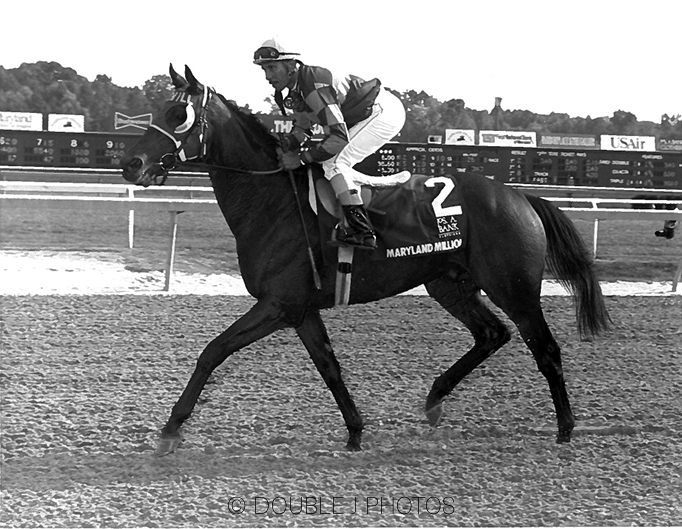 Awad was wiry, tough and durable. Bred and campaigned by Jim Ryan’s Ryehill Farm and named for Palestinian peace activist Mubarrak Awad, Awad raced from his juvenile season in 1992 through 1998, made 70 starts, won 14 - 11 stakes, four Grade 1 - was second or third another 21 times, and earned $3,270,131. He retired, and remains, the second-richest Maryland-bred in history.

Awarded the title of Maryland-bred champion turf horse four times, in 1993 and from 1995 to 1997, Awad competed in the nation’s most prestigious turf races. Facing much more imposing foes, the 15.3-hand bay turned in two of the most spectacular performances by a Maryland-bred in history when taking the Arlington Million Stakes-G1 and Sword Dancer Invitational Handicap-G1, both in course record time.

The 1995 Arlington Million saw Awad return to the site of his first Grade 1 victory, Arlington’s Secretariat Stakes captured during his 15-start 3-year-old campaign. The Million included high profile runners Sandpit (Brz), Tinners Way and Northern Spur (Ire), but Awad found the turf, and the early fractions, to his liking. More than a dozen lengths off the quick early pace, he sailed past the field to win by more than two lengths. The final time of 1:58.69 remains the Arlington Park course record for a mile and a quarter. He earned a Beyer Speed Figure of 114, the highest of a career in which he recorded 32 triple-digit Beyers.

Awad did not win another stakes for nearly two years, but during the 20-race dry spell he amassed nearly $1 million, racing coast-to-coast as well as in Japan. When he lined up for the Saratoga’s 1997 Sword Dancer, a race in which he finished second, by a neck to Kiri’s Clown, in 1995, Awad was not overlooked. The third choice in the field of 10, he galloped nearly two dozen lengths off the early pace in the mile and a half contest, picked it up with a half mile to go, and rolled down the stretch to a two-length victory. He completed the distance in 2:23.20, which is the Saratoga record to this day.

The fourth Grade 1 victory of Awad’s career came in the 1995 Early Times Manhattan Handicap at Belmont. Rating nearly a dozen lengths back, he went five wide around the far turn and got up to win by a nose. He was guided by Eddie Maple, who rode him in 21 straight races from February 1994 through April 1996. Among their victories during the streak were the Grade 2 Pan American Handicap and Grade 3 Hialeah Turf Cup and Bougainvillea Handicaps.

Awad’s best season came in 1995, when he earned $1.2 million while winning or placing in five graded stakes. He arguably is the best state-bred in history to not have been named Horse of the Year, as his best years coincided with those of two-time Eclipse Award-winning Horse of the Year Cigar, and Eclipse Award winner Smoke Glacken.

A son of classic winner Caveat out of stakes winner Dancer’s Candy, by Noble Dancer (GB), Awad entered stud at Northview Stallion Station in Chesapeake City, Md., in 1999, where he stood until moving to Pennsylvania in 2005. He retired a number of durable, hard-knocking runners, including the likes of stakes winners John’s Pic, Let Me Be Frank and Underbidder.

Retired from stud after the 2006 season, Awad moved to the Old Friends retirement facility in Kentucky that fall, where he lived out his days. He was found dead in his paddock on July 23, 2011, stricken by an apparent heart attack. He was 21.