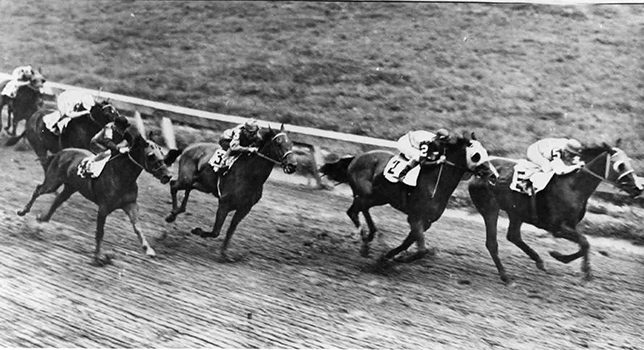 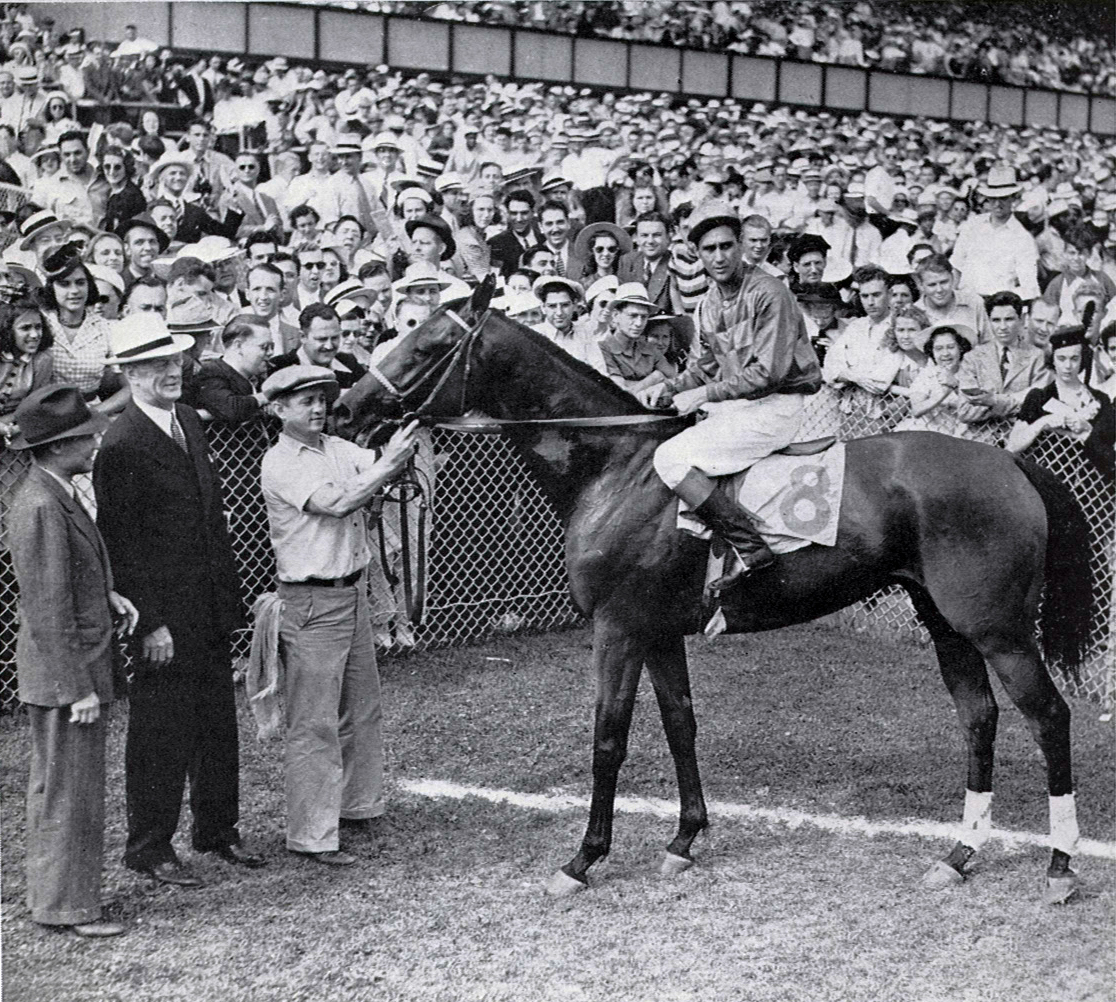 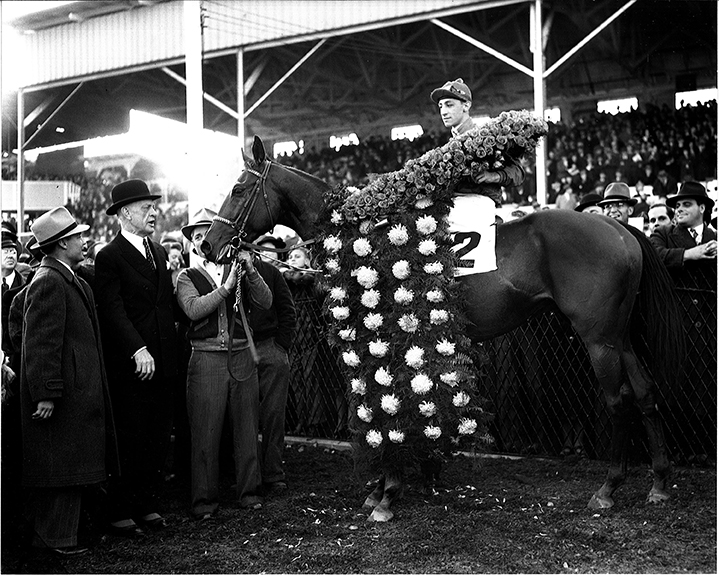 When Challedon became the first horse in history to be acclaimed Horse of the Year twice (1939-1940), his feats were on the lips of every person of the Free State.

The pride of Maryland took the hometown crowd on a magical ride, which reached a frenzy in the 1939 Preakness Stakes, in which he defeated Kentucky Derby winner Johnstown over a muddy Pimlico strip. "Baltimore Street bus boys and motormen on the old No. 14 Ellicott City Line sang his praises along with the landed gentry. His victories were toasted in gatherings all over Baltimore," wrote Joe B. Hickey.

Following his 3-year-old championship campaign, noted racing authority John (Salvator) Hervey commented: "It is the belief of the great majority of Turfmen - and a reasoned one - that Challedon… is one of the greatest Thoroughbreds ever seen in this country. This opinion embraces all horses of our entire Turf history, from 'the earliest-date to the present day,' and barring none, even the mightiest, whose names, in the words of the poet, forever echo 'down the corridors of time.'

Foaled at Branncastle Farm near Frederick (later known as Glade Valley Farms), Challedon was bred and owned by preeminent local breeder William L. Brann, who had purchased the colt's sire, the top-class English-bred juvenile *Challenger II, as a race horse and retired him to stud at the Maryland farm.

Challedon showed his class late in his 2-year-old season when he won the Maryland, New England and Pimlico Futurities, and four races in all. Hervey was impressed, noting "He should be one of 1939's great 3-year-olds."

Nine times did Challedon score at 3, all stakes, and was out of the money but once. In addition to his popular Preakness score - his first win of the year and off a second-place finish in the Kentucky Derby the week beforehis brilliant performances included the rich Classic at Arlington Park, plus the Narragansett Special, Hawthorne Gold Cup, Tranter Purse at Keeneland (in a world record 1:54.60 for a mile and three-sixteenths), Yankee, Havre de Grace and Maryland Handicaps (the latter under 128 pounds) and the Pimlico Special, his final race of the season which he won easily as the overwhelming favorite with Eddie Arcaro in the saddle. Besides being the best horse in training, Challedon's earnings of $184,535 gained him recognition as the leading money winner of 1939.

In 1939, B.C. (Before Citation), Arcaro declared Challedon to be the best colt he had ever ridden. At 4, Challedon made a cross-country trip to win the Hollywood Gold Cup, came back to Saratoga to take the Whitney Stakes four weeks later, and returned to Maryland to score again in the Havre de Grace Handicap and Pimlico Special. Seven starts, never worse than third, he was once again ranked as the best horse in the nation.

Challedon nursed an injured foot in 1941, but came back in 1942 under the guidance of trainer Edward Christmas (later of Gallorette fame). He made 13 starts that season, and although showing a glimmer of his former brilliance, he ran tough against the best runners of the year, including Whirlaway, Shut Out and The Rhymer, and got the 17th stakes win of his career in Havre de Grace's Philadelphia Handicap. He was a horse of "perfect disposition, having great speed and the ability to carry it on, and a racehorse of the highest class."

Entering stud in 1943 at Ira Drymon's Gallaher Farm in Lexington, Ky., Challedon retired with a record of 44 starts, 20 wins, seven seconds, six thirds and $334,660, which placed him sixth on the list of all-time money winners at the time. He sired 13 stakes winners and the earners of nearly $4.5 million, his best runners being steeplechase champion Ancestor and 15-time stakes winner Donor, an earner of $367,560. Perhaps his best contribution to Thoroughbred pedigrees is through his stakes-placed daughter Flitabout, whose descendants include leading sire Seeking the Gold, champion Queen of the Stage, and Ruffian's sire Reviewer.

In the words of Joe B. Hickey Jr., Challedon "died a-runnin" at 22 when suffering injuries from a paddock accident in January 1958.