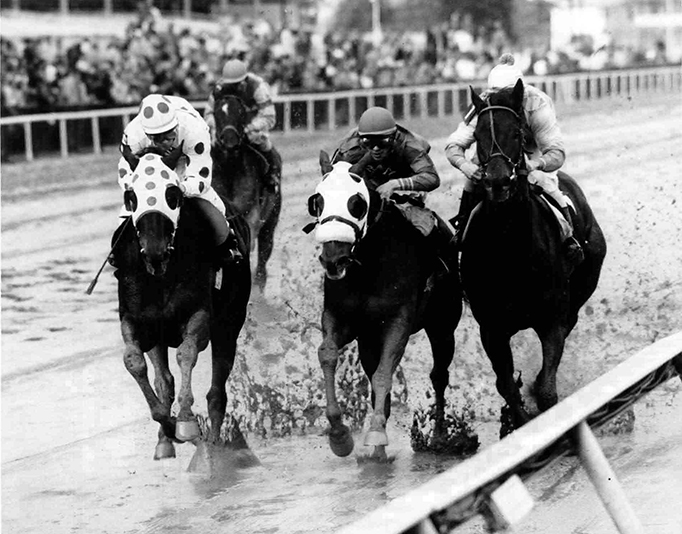 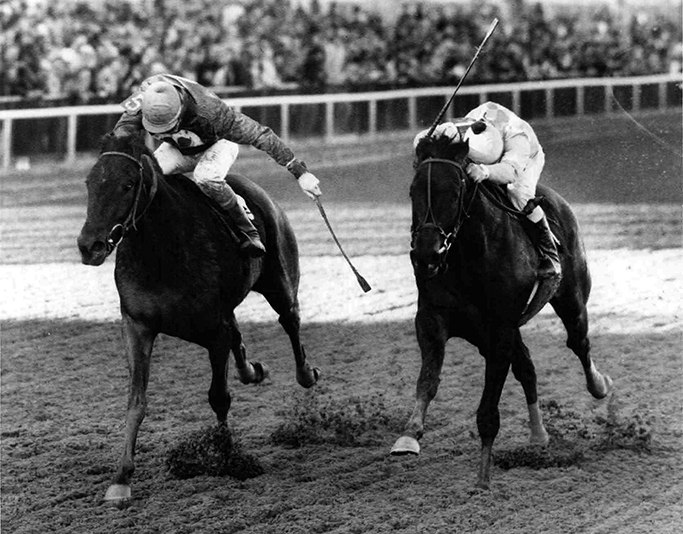 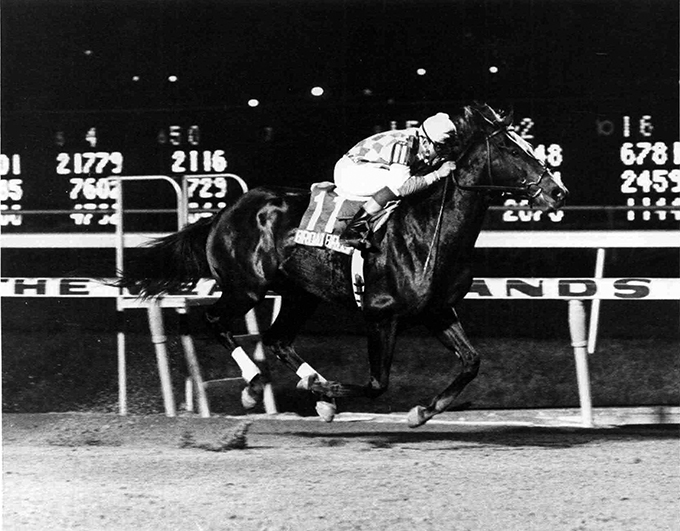 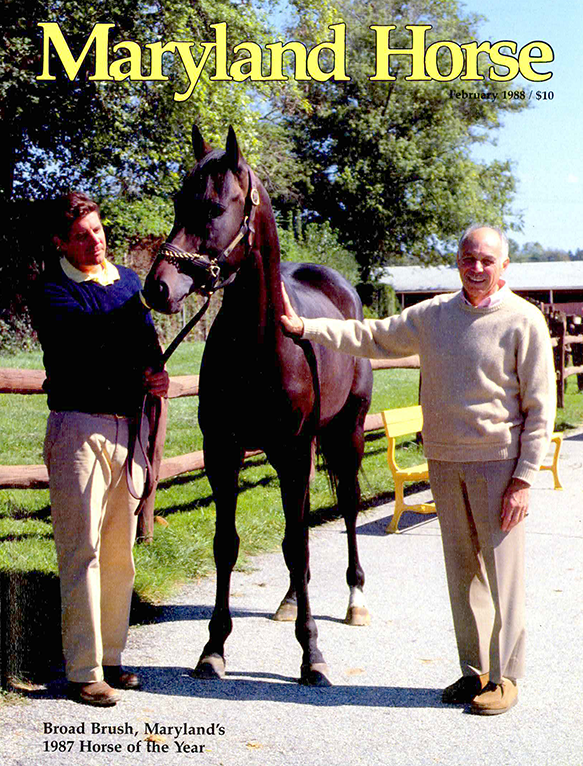 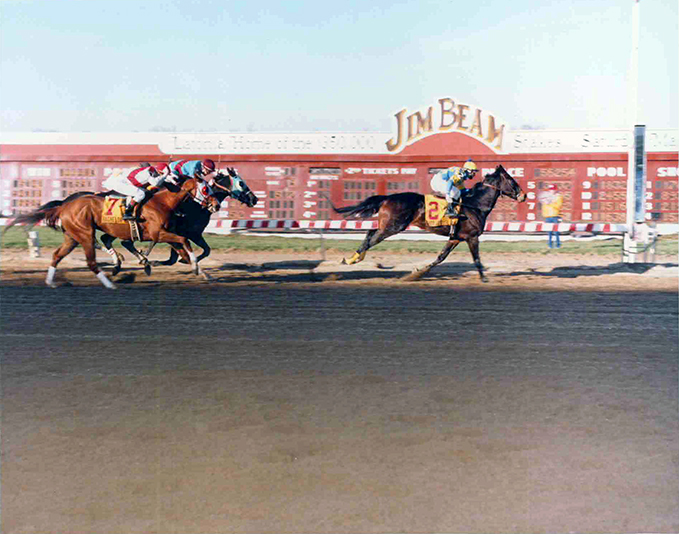 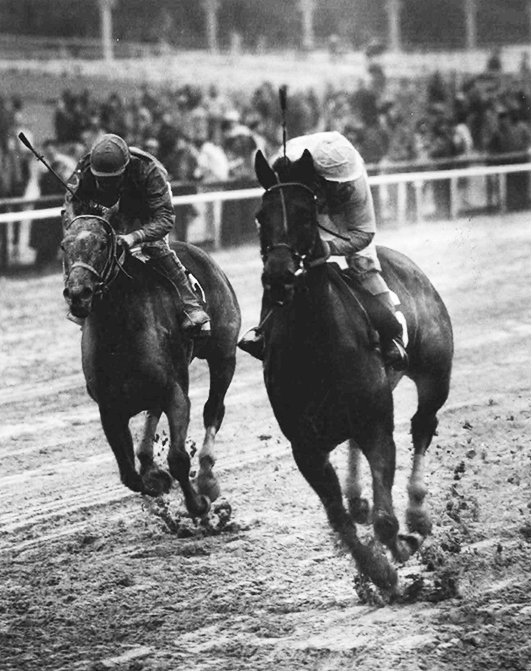 A horse of Broad Brush's caliber does not come along every year - or even once a decade - in Maryland.

Winner of nine graded stakes (four Grade 1), out of the money only three times in 27 starts, the "iron horse" of his generation compaigned steadily for 22 months before ankle problems led to his retirement early in October 1987. His 14 victories were earned over 10 different race tracks, on all types of surfaces, and he won from off the pace and on. Broad Brush ranked as the nation's fifth leading money-earner in 1987 at the time of his retirement.

In the words of his trainer, Richard W. Small, Broad Brush was a "pretty darn amazing horse." By winning seven of his 14 starts as a 3-year-old in 1986, plus three seconds and two significant thirds (in the Grade 1 Kentucky Derby and Preakness), Broad Brush demolished the all-time money record for a Maryland-bred that year, earning $1,409,778. Adding in his 2-year-old winnings of $42,335, Broad Brush amassed $1,452,113 by the end of his sophomore season, which earned him the titles of 1986 Maryland-bred Horse of the Year and Champion 3-year-old colt or gelding. In Eclipse Award voting, Broad Brush was voted the third leading 3-year-old in the nation (to classic winners Snow Chief and Ferdinand).

Broad Brush's last two races of 1986 might be worth a chapter each, should a book ever be written about his feats. His next-to-last effort was the Pennsylvania Derby-G2, which he won after bolting dangerously near the outside fence when leading by five lengths at the head of the stretch. Apparently hopelessly beaten as the field surged by on the turn for home, Broad Brush was pulled together by a desperate Angel Cordero, rallied and won by a length and a quarter.  An exhausted Cordero was quoted after the race: "I still don't believe it. In my 26 years of riding, I never saw or rode a horse like him who bolts and still wins the big race like this. Never, never, never." He concluded his season facing older horses for the first time in the Grade 1 Meadowlands Cup. Sent off as the favorite in the field of 10, he defeated Skip Trial by nearly four lengths in the $500,000 mile and a quarter stakes.

Broad Brush's 1987 campaign was launched in California, where he was pitted against the toughest rivals of his generation in the sequence of three Grade 1 races known as the Strub series at Santa Anita. He gave an excellent account in all three, with the highlight coming in the final event, the $1 million Santa Anita Handicap-G1, which he got up to win by the gallant bob of a nose over Ferdinand.

That year Broad Brush added another Grade 1 win in the $350,000 Suburban Handicap at Belmont Park on July 4, plus two Grade 3 races, one in track record time. His final appearance came in the Whitney Handicap-G1 on August 8, when a crowd of 50,407, reported to be the largest at that time in the history of Saratoga, watched him come in third (as 2-1 favorite) behind Java Gold and Gulch.

Owner/breeder Robert E. Meyerhoff, who had planned to continue racing Broad Brush as a 5-year-old had the horse remained sound, syndicated him for $4 million ($100,000 per share). Broad Brush stood his entire career at Gainesway Farm in Kentucky, and was the nation's leading sire of 1994, the year his son Concern won the Breeders' Cup Classic-G1. He also sired 2002 Eclipse Award-winning champion 3-year-old filly Farda Amiga.